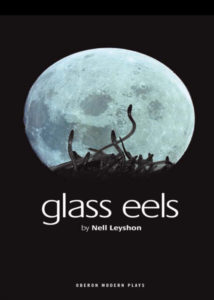 During a heady, hot summer, a young girl’s sexual awakening is coloured by shadows of her early childhood. Written with Leyshon’s characteristic stark lyricism and suffused with the austere poetry of the West Country, Glass Eels dramatises the unconscious world of instinct where the lives of humans, plants and eels are all ruled by the primal rhythms of the wetlands. 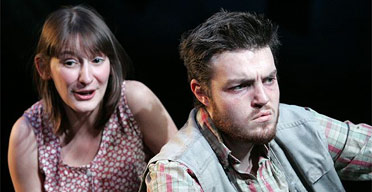 “No one else in British theatre today is writing like Nell Leyshon. Her work is set in the country rather than the city, and has as much in common with tone poems as it does with drama. Her plays are full of deep, shifting emotions – grief, frustration, fear, desire – and mix the naturalistic with a sense of history and mystery. […] Go with the flow, and this river play will carry you somewhere deep, dangerous and alluring.”
– Charles Spencer, Telegraph

“[Leyshon’s] focus is on the sexual awakening of teenage Lily: a solitary Somerset girl haunted by images of her drowned mother, jealous of her taciturn dad’s new lover and forced to act as skivvy to her food-obsessed grandfather. But the combination of hot August nights and the sight of eels wriggling in a bath arouses fierce longings in Lily which find expression in nocturnal riverside encounters with an older man. Leyshon clearly knows all about female yearning and stifling rural boredom…”
– Guardian

“[Leyshon’s] ear for language, particularly of her native Somerset, is exquisite…”
– The Stage